(French for “under vacuum”) is a method of cooking in which food is sealed in airtight plastic bags then placed in a water bath or in a temperature-controlled steam environment for longer than normal cooking times—96 hours or more, in some cases—at an accurately regulated temperature much lower than normally used for cooking, typically around 55 to 60 °C for meat and higher for vegetables. The intent is to cook the item evenly, ensuring that the inside is properly cooked without overcooking the outside, and retain moisture.

The method was first described by Sir Benjamin Thompson (Count Rumford) in 1799 (although he used air as the heat transfer medium). It was re-discovered by American and French engineers in the mid-1960s and developed into an industrial food preservation method. The method was adopted by Georges Pralus in 1974 for the Restaurant Troisgros (of Pierre and Michel Troisgros) in Roanne, France. He discovered that when foie gras was cooked in this manner it kept its original appearance, did not lose excess amounts of fat and had better texture. Another pioneer in sous-vide is Bruno Goussault, who further researched the effects of temperature on various foods and became well known for training top chefs in the method. As chief scientist of Alexandria, Virginia-based food manufacturer Cuisine Solutions, Goussault developed the parameters of cooking times and temperatures for various foods.

As may also be done in traditional poaching, sealing the food in sturdy plastic bags keeps in juices and aroma that otherwise would be lost in the process.

The use of temperatures much lower than for conventional cooking is an equally essential feature of sous-vide, resulting in much higher succulence: at these lower temperatures, cell walls in the food do not burst. In the case of meat cooking, tough collagen in connective tissue can be hydrolysed into gelatin, without heating the meat’s proteins high enough that they denature to a degree that the texture toughens and moisture is wrung out of the meat. In contrast, with the cooking of vegetables, where extreme tenderness or softness is seen as undesirably overcooked, the ability of the sous-vide technique to cook vegetables at a temperature below the boiling point of water allows vegetables to be thoroughly cooked (and pasteurized, if necessary) while maintaining a firm or somewhat crisp texture. While the cell walls are generally not burst, the de-polymerization of the pectic polysaccharides that connect the vegetable cells together and/or the gelatinisation of starch in the vegetable can be achieved without overcooking.

Additionally, enclosed spices or ingredients added to the food item transmit their flavor more intensely than during normal cooking.

From a culinary viewpoint, the exclusion of air is secondary, but this has practical importance: it allows cooked food to be stored, still sealed and refrigerated, for considerable times, which is especially useful for the catering industry; and it excludes oxygen from food that requires long cooking and is susceptible to oxidation, e.g., fat on meat, which may become rancid with prolonged exposure to air. 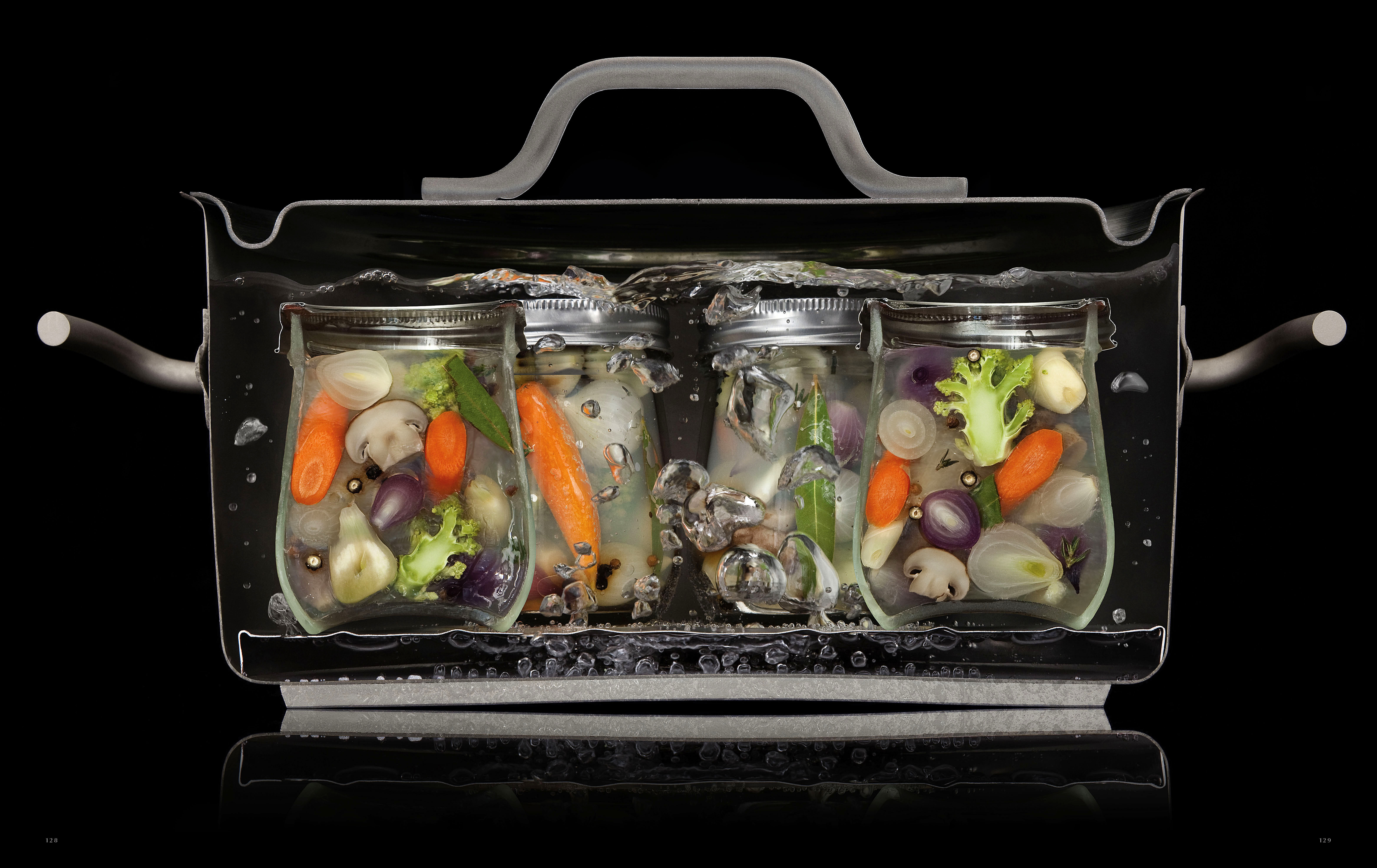 The degree of accuracy and constancy of cooking temperature required varies with the food cooked. In some cases it is not critical; a 15 mm thick piece of fish will cook in 17 to 18 minutes at any temperature from 44 °C to 61 °C; such food can be cooked in a switched-off slow cooker filled with hot water and a thermometer. But for an egg, which has proteins that denature at different temperatures, it is much more critical.

Cooking times for normal cooking are determined by when the center of the cooked item reaches a few degrees below the targeted temperature. Then heating should be stopped immediately; while resting the food, residual heat will continue to cook it for a while. If the heating continues, the food will be over cooked. Sous-vide cooking continues until the center of the food has reached its target temperature; if it continues after this, the food will not be overcooked, and it will not cook more after it stops being heated. The time taken for the center of food to reach the target temperature depends on the initial temperature, the thickness and shape of the food, and the temperature of the bath.

Once it reaches the target temperature, there are still three factors determining when to stop applying heat to the food, in order to:

One limitation of sous-vide cooking is the fact that browning (Maillard reactions) happens at much higher temperatures (above the boiling point of water). The flavors and “crust” texture developed by browning are generally seen as very desirable in the cooking of certain types of meat, such as a steak. The flavors and texture produced by browning cannot be obtained with only the sous-vide technique. In many cases, meats and other foods cooked with the sous-vide technique will be browned before and/or after being placed in the water bath, using techniques such as grilling or searing on an extremely hot pan. This secondary browning is done briefly, and sometimes at higher heat than normally used, so as to affect only the surface of the food and to avoid overcooking the interior. Similarly, the skin of fish can be cooked at high temperatures after the sous-vide to make the skin crisp.

Food safety is a function of both time and temperature; a temperature usually considered insufficient to render food safe may be perfectly safe if maintained for long enough. Some sous-vide fish recipes, for example, are cooked below 55 °C . However, pasteurization of the food to be eaten by people with compromised immunity is highly desirable. Women eating food cooked sous-vide while pregnant may expose risk to themselves and/or their unborn child and thus may choose to avoid unpasteurized recipes.

Clostridium botulinum bacteria can grow in food in the absence of oxygen and produce the deadly botulinum toxin, so sous-vide cooking must be performed under carefully controlled conditions to avoid botulism poisoning. Generally speaking, food that is heated and served within four hours is considered safe, but meat that is cooked for longer to tenderize must reach a temperature of at least 55 °C within four hours and then be kept there for sufficient time, in order to pasteurize the meat.

Pasteurization kills the botulism bacteria, but the possibility of hardy botulism spores surviving and reactivating once cool remains a concern as with many preserved foods, however processed. For that reason, Baldwin’s treatise specifies precise chilling requirements for “cook-chill”, so that the botulism spores do not have the opportunity to grow or propagate. Pasteurised food can then be stored for up to two weeks at around 3 °C sealed within the vacuum pack.

The plastic used must not leach endocrine disruptors. Many plasticizers used in plastics have these properties. 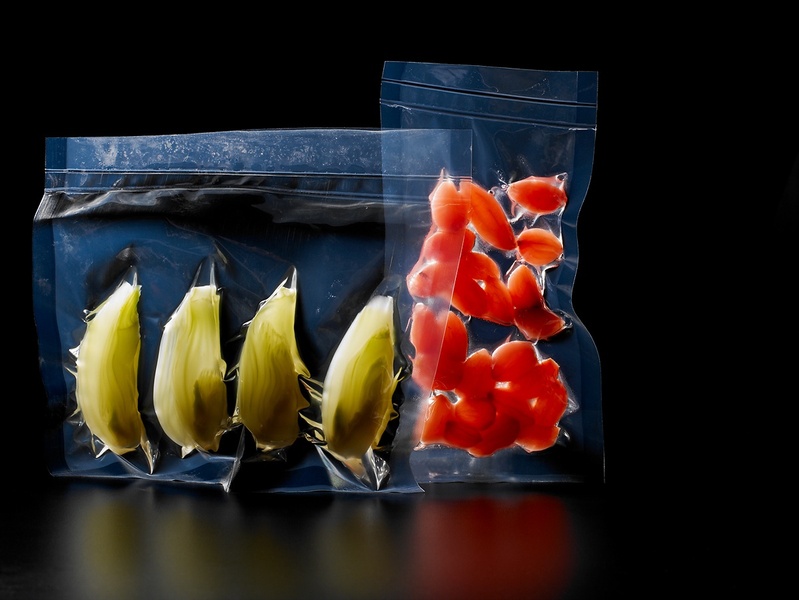 Initially, enthusiasts used laboratory-grade thermal immersion circulators, often bought used on eBay and requiring very careful cleaning, even then not being recommended for kitchen use. Beginning in 2008, Auber Instruments and Fresh Meals Solutions made available comparatively inexpensive, yet highly accurate PID controllers with an attached thermocouple probe that could be used to control a commercial rice cooker, slow cooker, electric stock pot, or similar apparatus. In late 2009 the Sous Vide Supreme sous-vide machine (which does not circulate the cooking water) and Addélice swid immersion circulator, both intended for home use and less expensive than laboratory-standard equipment at a few hundred euros, went on sale.

A more expensive, but more universally usable solution is available in the form of combi steamers. Instead of a water bath, they feature a tightly-controlled steam generation system.

It is possible to duplicate some effects of sous-vide techniques with the use of a beer cooler filled with warm water, checked with an accurate thermometer, and ziploc bags with the air sucked out to package the food for cooking. However, the heat loss involved in this technique makes it unfeasible for long-term (4+ hours) cooking. Additionally, the high temperatures required for vegetables may melt the materials of the average cooler.

Send this to friend